The end of a chapter - My movie is screening!

Almost two years ago I started this blog to cover a sail and ski expedition I did with a couple of good friends. Somehow (its all Fredriks fault) I ended up taking on the task to put all the hours of film material we had gathered into a movie. At least the attempt of doing one. In all honesty, it was never ment to be much more then a movie for ourselves to remember a fun trip from, and the material we had was pretty messy. But it was a good story, at least I think so, and the quality of the film clips were pretty good too. Me, Fredrik and Johan had set out with a simple plan to capture as much of the trip as possible as it happened, and one of our icelandic skippers Runar help out to. With the film quality you get with a HD capable dslr camera today (mirror less Sony Nex5 in my case) you can really do just that. In addition most people in our group were experienced adventures and set for a good show. Fredrik Schenholm who came up with the idea in the first place is an accomplished photographer who together with Martin Letzter (climbed Seven Summits among other things) had set out to publish an article about the journey in Swedish Outside Magazine, which they later succeeded with. So we had some pretty good shots to start with.

Still, if it had not been for me moving to the US with Anna, and as a result had to much free time on my hands with to little fun to kill it with (Baltimore isn't exactly a skiers or surfers mecca if you didn't already know) the first few months it would have stopped there. Instead it became "a bit" of an obsession for me to finish this film, and once I start something I usually don't stop until I really like the result. Many hours went into that. I don't really want to think about just how many. When I finally finished the movie I was so sick of it I did not ever want to see it again. I let it sit for more then half a year, then just to get it out of my mind, I picked it up this fall and brushed it up a little more (thats what my long commute is good for), and send it out to a couple of film festivals. Not that I thought it was going to get anywhere but I needed to finish the chapter one way or the other.

Last week I got the surprising but really great news that the movie have been accepted to the inaugural Annapolis Film Festival. I am very proud, surprised and happy about that! And really thankful to all the people who helped me (Anna has been very patient with me.., the crew, Fredrik and Johan, and Bob who gave me the right to use his awesome music to mention a few).

The screening is the 24th of March, which will be when I am out on the ocean outside Puerto Rico doing marine habitat research for NOAA again. A bit of a bummer I can't be there but Anna and some friends have promised to cover the event (and nobody seems to feel sorry for me as I will be down in the Caribbean...). Anyway, great to be able to close the movie chapter with an accomplishment for the hard work and move on to kill my commute time with other things - with 2.5 months of field time planned in Puerto Rico this year I am attempting to learn a few words of spanish (but I have been saying that for years now).
Other things that happened the last little while (I'm not so great at continuously updating my blog with everyday life event, I know..). Linus and Lisa, and their charismatic little one year old Sixten came to visit as a part of their honey moon. First time Swedish friends made it here so we were really happy they made it for some getto tours in Baltimore, and lots of wine and cheese evenings to catch up. 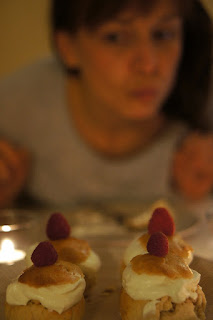 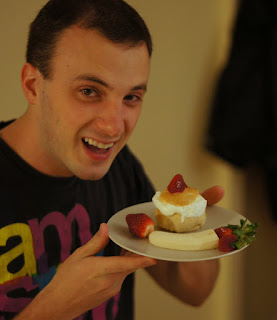 Anna made me some sweet Fat Tuesday buns for Valentines (Ok, I take responsibility for the rasberries). I felt sorry for Andrew missing out and made him a special design!

In two weeks its time for some adventures with NOAA again, stay tuned!
Posted by Climbfish at 7:30 PM