YES! I won't keep you wondering any longer. She said Yes! Even though she have had two solid years of evaluating my performance as a husband -> Former Anna Larsson are now Anna Kågesten! We had actually planned to take Sindjö, Annas mums maiden name as our middle name to (ie Anna Sindsjö Kågesten) But Swedish name laws are a bit restrictive to say the least. They may change next year though, so we will see what happens then. 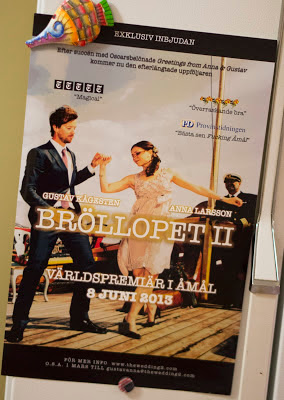 For those of you who are confused by Wedding 1 and Wedding 2, I'll give a quick version of the story once and for all.

Wedding 1: June 06 2013. A secret wedding onboard the East Indiaman Ship replica Götheborg, with 2 friends as witnesses. Later turned into a movie that was released to friends and family a few months later - Surprise!! Sorry Jan and Gunilla for not asking for permission, but I think we got that cleared now... right? The Wedding 1 also had the advantage of granting me a Visa to the US so we could stay together, which may or may not have had something to do with the quick turnaround - 2 weeks between engagement and wedding is pretty good!
(As you might have noticed, if you are sensitive to exclamation marks this might not be the post for you)

Wedding 2: June 08 2013. Slightly more planned (12 months) and a few more guests (110pp). A wedding without bringing your friends and family together is only half a wedding. Wedding 2, which we planned since before the first surprise truly was the missing piece. You can see it as the wedding chapter 1 and chapter 2 that together turned into The Wedding Sequel. Kind of like Lord of the Rings, but that one comes in three parts - I think we are quite happy with two partys. I hope that clears things for you. If not I can simplify it for you by this statement: We undeniably are husband and wife now! Still don't get it? Here are some graphics for you just to make sure:

Now that we got that squared away... With friends/family so spread out over Sweden/Earth, it was a wicked feeling to have so many gathered - 110 friends online in real life beats the crap out of Facebook.  A 7 day wedding like in the old days would have been more appropriate. Maybe there will be a three part sequel after all, "Return of the King"? To the point, we can't thank everybody enough for making it to our celebration (and to those who tried really hard but didn't make it around the globe), our parents and family who made it all possible, Sune for the ceremony and for getting our wedding picture published in all sort of papers, friends who made performances and helped out and last to fetknopp och grisen (Olle and Pelle) for the wicked toastmaster performance and support. You rock!!! There are about 1 billion pictures from the wedding and the preparations, not to speak about the video material from it all (though, if you have some more, please send us). So I will finish this blogpost with a "few" selected snapshot of that week in Åmål.