Back to work on the big blue

You might not believe me when I say I have an intense work week behind me when you look at the pictures below. And to be fair, though we truly have been hard at work solving technical problems and crunching data through our computers for 9 days in a row in a dark room, I can't deny that we are having a pretty good time out here. This is the third year I'm doing the research cruise on the NOAA ship Nancy Foster and by this time both the science team and the boat crew are well known friends.

A couple of highlights
1. Arriving late to St. Croix, USVI, due to an overbooked plane which forced me to stay a night on a small island hotel with it's own snorkel beach and reef. Next day I got my own boat ride with the park service arriving Nancy Foster (already offshore working) VIP style :)

2. ROV (Remotely Operated Vehicle) dives in fishy waters. Yesterday we had 3 large lemon sharks circling the ROV and today we had a hammerhead shark cruising by the camera. Later this evening we saw a shark fin following the boat for a few short seconds while fishing off the stern. Glad to see reefs with live corals, big schools of fish and some sharks, it's been too little of that during some of the other trips I've done down here.
3. Handline fishing/trolling with lots of bites, counting 5 barracudas and one tasty Spanish mackerel so far. First time I am catching some fish on a NOAA ship. 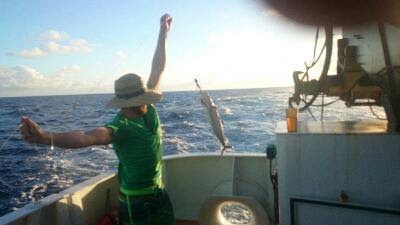 Only 2 more days before it's time to fly back on Monday, better soak up some sun... NOAA is forecasting that DC is in for yet another another snow day on Tuesday

Posted by Climbfish at 11:03 PM No comments:

A lesson in friendliness & a bonus in Loveland

I'm back in the Bmore and just went through an intense week of catching up at NOAA to get ready for our yearly research cruise in the Caribbean. Perhaps not so surprisingly nobody have been feeling very sorry for my hardship... Though good to be back the contrast from skiing in BC couldn't be greater. I thought I'd finish the story for you with some more pics and a couple of anecdotes.
The Canadians in the Selkirk Mountains (South interior BC) have been so friendly that we almost suspected we were getting tricked, but finally realising that the bearded men and fine Canadian woman living in the area of Nelson and Rossland were just extraordinary welcoming. An example:
(Me asking the skipatroll) - I noticed the North face of Gray mountain is closed, any chance we can ski there?
(Bearded ski patroll guy) - Oh, No problem ey just be careful ey, there might be some rocks ey, pretty narly ey, but you'll be ok ey...
After skiing the face with plenty of close calls with exposed rocks at full speed we realised the ski patrol were just too nice not to let us ski, though it really was a bad idea...
Other signs of the Canadian spirit was that we did not find a single locked door during the trip. The only AH of the trip was the Canadian border control who made us empty the car and unpacked all our bags while provoking us with all his might... Not the first time that happened at the Canadian boarder (while returning to the US have always been surprisingly smooth).
While skiing the backside woods at Red Mountain we (me, Sam and a three of his friends who had now joined us) heard music and found our way to a snowed in cabin. We invited ourselves and were welcomed to the Klister club 75th year anniversary (some sort of society, no tomatoes allowed). We were offered delicious homemade wine by the only present member of the club who then proceeded to show us a couple of secret runs in the woods before inviting us for more drinks. We all had a really hard time keeping up with the 60+ old man, he later departed to avoid getting home too drunk to his wife and their waiting guests. As you get older you get wiser(?)
The last day it kept snowing and the dump we had waited for was taking shape, though one day to late. Just as it was getting nice the lifts closed for the day. As there was risk of flight delays due to yet another snowstorm both in Baltimore and in Spokane I seriously considered about pushing the trip another day to avoid getting stuck in transit and ski powder the next day (win win!). But I really had to go back for work so I reluctantly gave up the idea and we drove back to the airport through some intense weather. What happened? I got stuck over night in Denver as my connecting flight got canceled with no compensation for hotel or other expenses (credit to SouthWest...), luggage stuck in transit and next available flight the following afternoon. Should have trusted my instincts to stay another day in BC! Q. What to do to turn bad luck into an opportunity? A. Rent a car, save money by sleeping in it on a Wallmart parking lot half way to the mountains outside Denver. Wake up early, have a tele-meeting in early morning, then rent a snowboard and clothes and hit the slopes at Loveland mountain. At 12.15 I was struggling to get up a small untouched ridge (almost 13000 feet Altitude makes you feel like climbing Mt Everest...) and met yet another friendly ski patrol who just finished blasting the face. He said 2 minutes, get ready... and opened up the terrain right in time for my last run (flight leaving in 3 hours...). Made it back right on time, with all frustration flushed out and a smile cemented on my face. 4 hours later arrived happy in Bmore to awaiting Anna and a snowy Baltimore (and a fine pile of work to whip me into action  the next day...)

Posted by Climbfish at 10:19 PM No comments: