While I've kept myself busy commuting and working computers, Rob and Megan have worked their land - Sweet Root Farm and Apiary (i.e. real work). We have made visits through the spring pretending to help them but in reality all accomplished has been to provide moral support and to snack on anything tasty in season. This weekend we joined for brunch and to help with the shallot harvest. I mostly helped by helping drinking bloody Mary's and taking photos of the action - leaving the back bending to the rest of the pack... In the end we got the job done rewarded by the tastiest great looking little gems I have ever laid my hands on.

Its a real treat to come out to the farm, its a time and place capsule which transfer you out of the paved city and into to the good old country side without even leaving town. Though the place is tranquil and peaceful for visitors Rob have a few more things on his mind, garlics and shallots is just a fraction of the job description Posted by Climbfish at 11:08 PM No comments:

I probably should have written this blog right after the race when I still had muscle memory how terribly hard it was to run 41 miles in one day. Now I look back and only remember the fun parts in a rosy shimmer. It's a problem because it means I might attempt something stupid like this again. Keep that in mind when you read the rest of this blog, not to be fooled.

The facts:
Race distance: 41 miles / 66 km in barefoot shoes
Elevation climbed/descended: 5474/4856 feet (1668m/1480m, or two Åre Skutan up and down)
Race time/foot massage: 10 h 8 min
Position: 100 out of 180+ starting
Muscle pain: every single muscle, including several unknown ones
Sore feet: Yes and Yes
Blisters: None of any significance
Injuries: None that I know of

Training completed pre-race: 4-11 miles 2-3 times/week for 2 months
Longest run ever pre-race: 13 miles /21 km
Another blogger described the terrain like this: According their website, Highlands Sky 40 mile trail run “is a demanding course on varied terrain”.  Let me try to list the variety of just some of the terrain. There is a metal bridge, multiple wood bridges, makeshift log bridges, asphalt, limestone, gravel, mud, nettles, poison ivy, boulders, rocks, pebbles, lichen, moss, thorn bushes,  stones, stumps, roots, snakes, dust, creeks, streams, ski slopes, and, and, and.
I couldn't have said it better... For more photos of the actual trails check out Tiffanys blog
My Race
After about 14 miles of climbing up and down I went from feeling great and having 100% focus on running the technical rocky wet trail in my flimsy five finger shoes to starting to get really tired. I still had only completed 1/3 of the distance. I slowed down and held it together till the mid station were Anna met up with food and love. Both needed. I recharged for 20 min, changed socks, decided keep the five finger shoes on and started running again. Next 7 miles on the straight gravel road "across the sky" was like a  slug race. You would pass another runner in slow motion (by this time "running" had got a new definition), then they would pick up and pass you 10 minutes later, just as slow... I passed the time with good conversations with all the other friendly runners I met, most of them seasoned ultra runners that were curious what an inexperienced Swede living in Baltimore was doing out there. I celebrated running a marathon at mile 27, had a drink of coke at the aid station and got my best "runners high" feeling super strong and stretching my legs on the softer wilderness trail in the open meadows of the Dolly Sods wilderness. Not much later I was running/walking in slow motion again, taking 1 hour to run 2 miles (3.5 km), then picked up some speed again a bit later. It was incredible hard to consistently keep running at times, no matter how slow. Walking up hills helped a lot, and so did a few shorter stretching breaks here and there, but the conception of a hill changed dramatically through the race. At mile 33 or so there was a last climb up a ski slope (were I missed an exit and ran too far up hill), then down on the other side. It was so step I could only butt slide or carefully step down. Not exactly the kind of effortless downhill I was hoping for, though my downhill ski legs certainly helped. The last 4 miles was on the road and Anna kept me company on her bike, great to get support again. 4 miles can feel like a really long way when you have been out there for 9 hours already. Finishing was fantastic, and for the next hour or two Anna was serving me beer and food as I was "incapable" of getting it myself... I owe her. 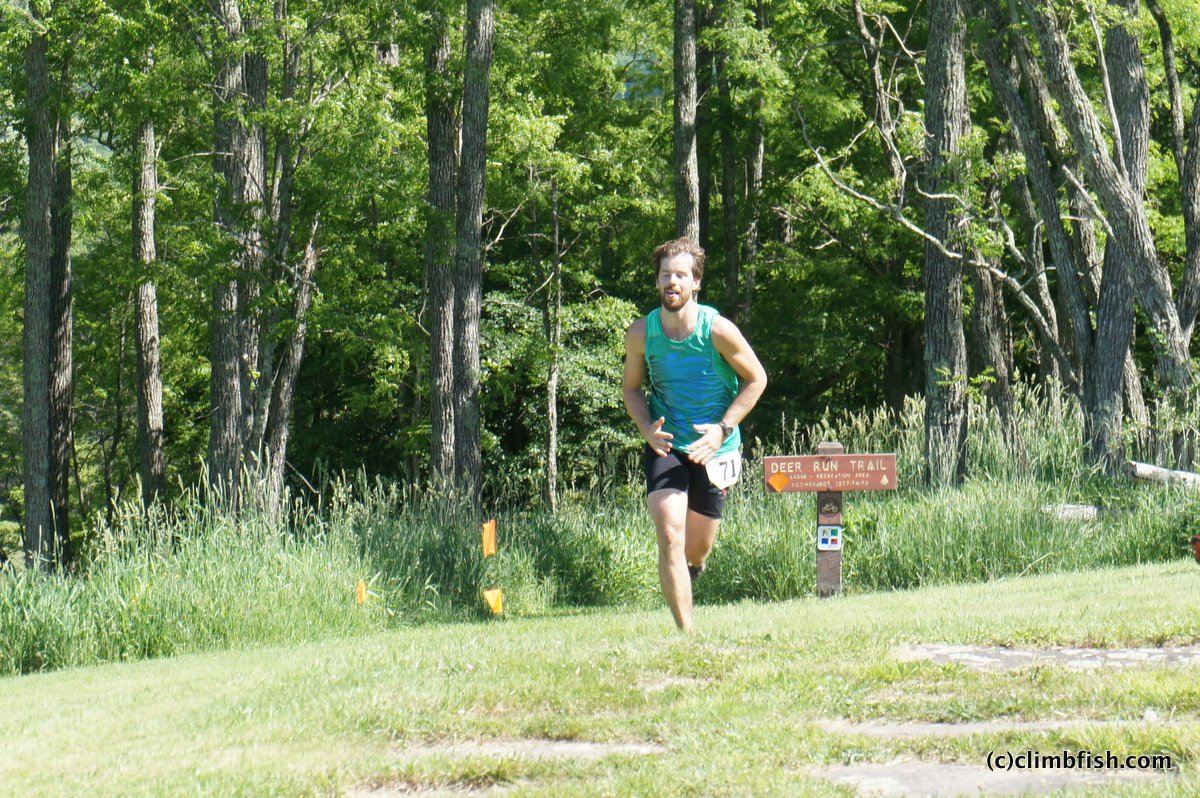 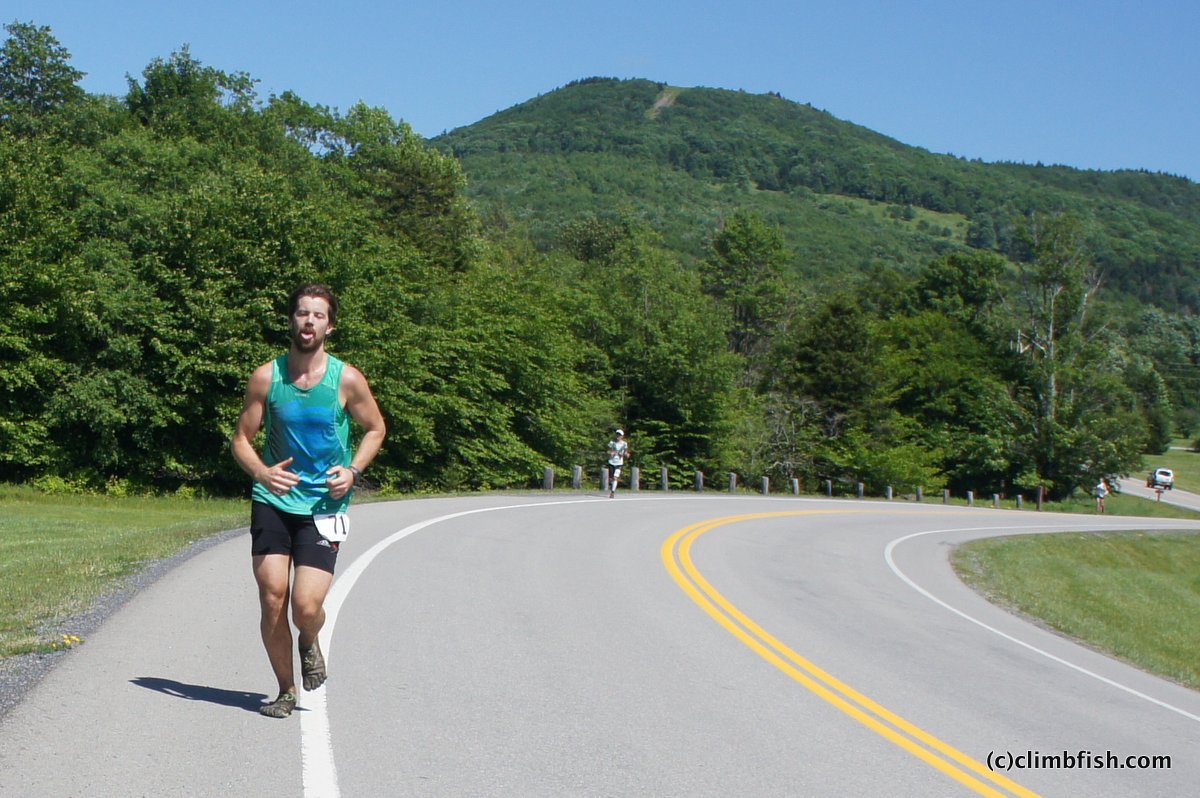 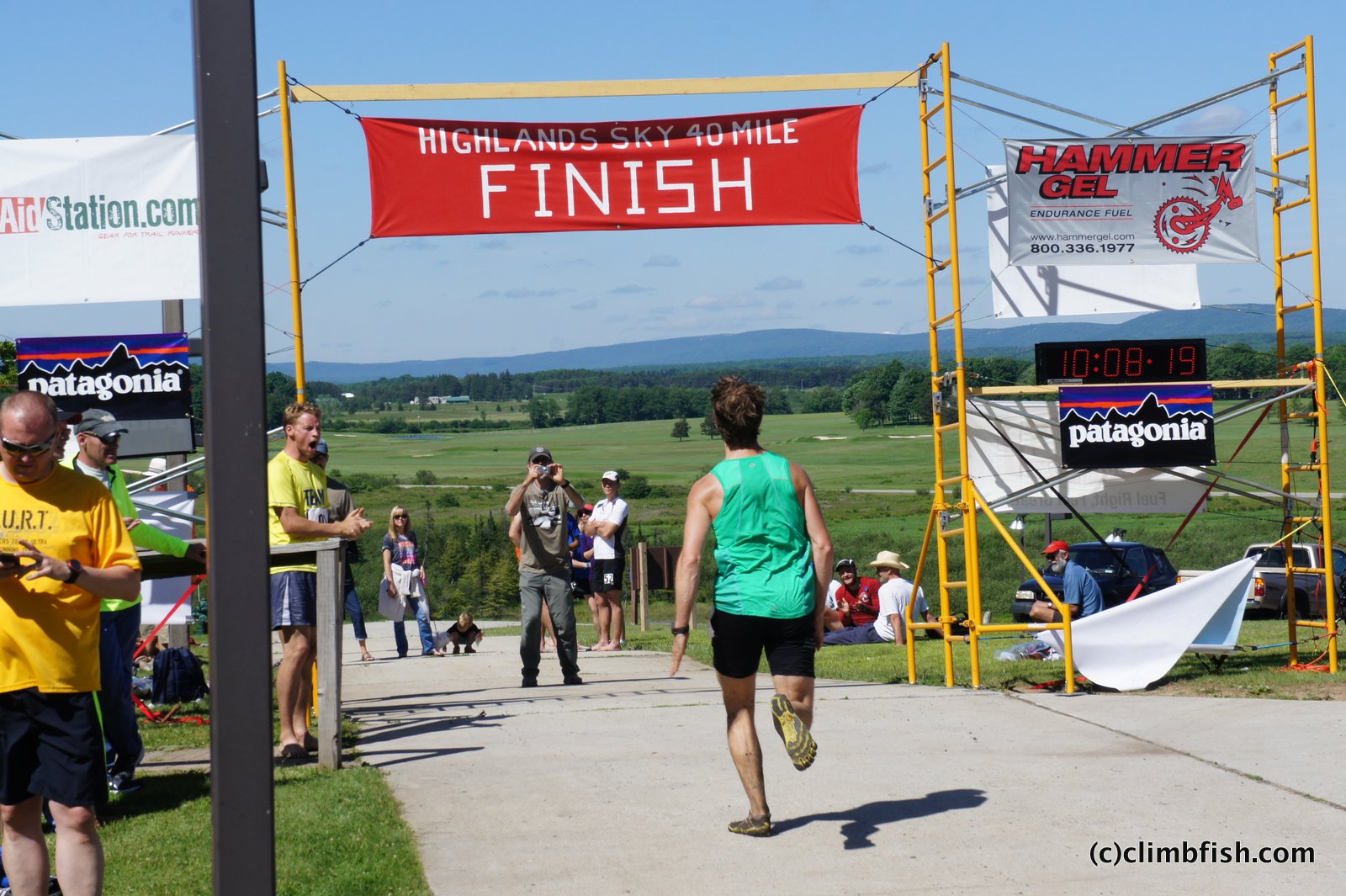 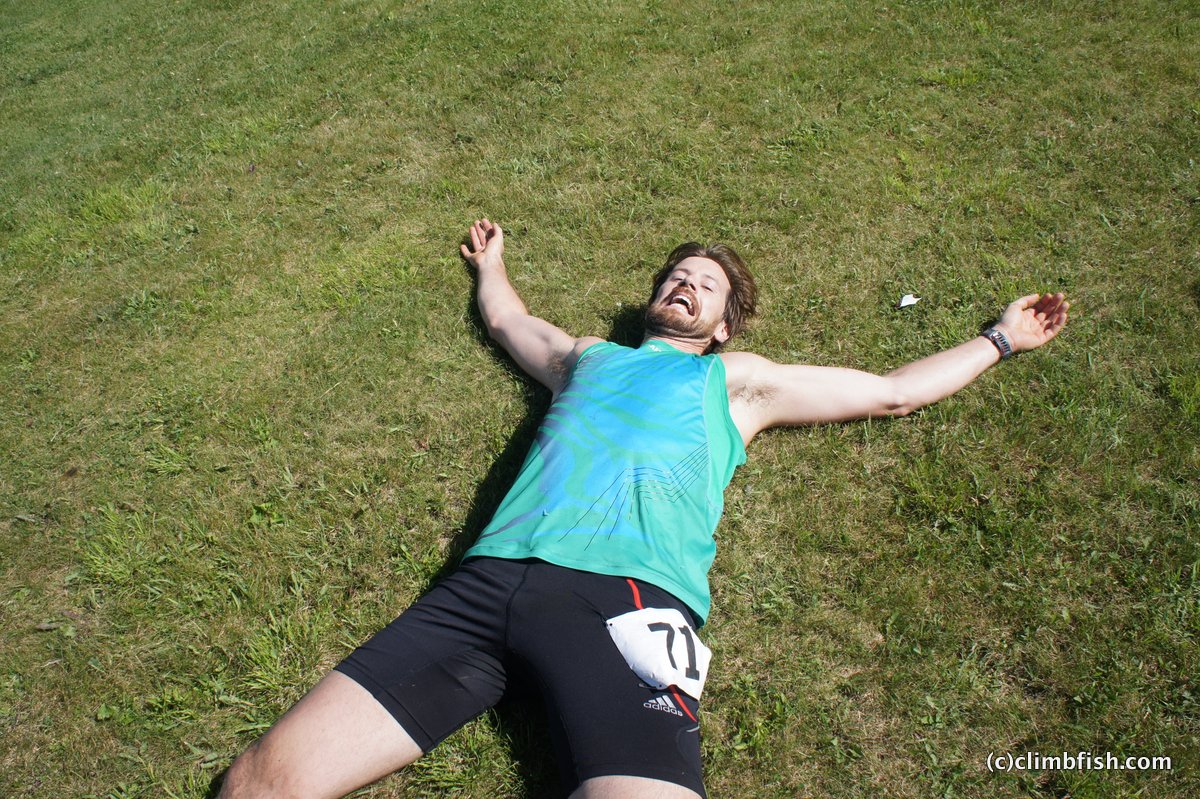 Barefoot shoes and other lessons learned
A lot of people before and during the race would comment on my choice of shoes. And to be honest I had no idea how it was going to work out running this kind of distance in my thin "bare foot" shoes in one of the roughest terrain trail runs on the East Coast. especially since I had not been running more then 11 miles during training. In the end it actually worked pretty damn good. No knee problems, no blisters, no falls. On the other hands my feet got really well massaged and they are still a bit swollen a few days later, also I was not able to run as fast and relaxed as people in more protected shoes on the really rocky areas, and lost a bit of time there. I also worked all the muscles in my legs to exhaustion. On the other hand they were light, worked well to run with in the muddy water and I had great control on the slippery trail. I will definitely keep training in these and I'll be happy to run long races in them, but if I ever run this kind of rough trail ultra again (not to mention a 100 miler, puh!) I'd go for something that protects form the sharp rocks a bit better to pick up some more speed and save my feet and energy (some people even have steel plates in there shoes to protect themselves).
Other great thing I learned is that I can run for a whole day even with mediocre pre race training without getting injured. pretty awesome. I think the great variety you get on these technical trails helps you avoid injuries, and keeps you from getting bored. Give it a try!!! Dan who arranged the race and all the volunteers did an awesome job, and the scenery and the weather was perfect. I'm stoked I found this and was dumb enough to go through with it.


Soo... would I do this again? Not sure I can answer that yet but probably. I forget quickly and am quite responsive to peer pressure. Though I think my next challenge will involve some other mean of transportation
Posted by Climbfish at 11:14 PM 2 comments:

Resurrection and a cliffhanger

No I’m not dead nor is this blog… I just had a busy life and work spring and ran out of time and ambition. To make it up to any readers still out there I am starting off with a cliffhanger
I have done quite a few ill advised things in my life, posting this letter might be one of them. In about two days from now I will know the answer. A couple of months ago, just after I came back from the Caribbean cruise, I got this great idea that it would be fun with a challenge to kick me in shape again. I consulted google and found this cool trail running race out in West Virginia a safe 3 months away. Then I pitched this idea to my “friend” Jay who immediately had me sign an entry form together with him to participate and two hours later it was safely in the local mailbox. Jay have since then dropped out (ok, he got a new born baby and claims he had a cold for the last 2 months but I think I know who the baby is) and left me alone to run Highline Sky, a 40 mile, 5000 feet elevation wilderness trail Ultra Marathon on Saturday.

My training, though sporadic, went ok until about 5 weeks ago when I first got a 2 week knock out cold, then conveniently almost broke my left big toe in a little bike mishap just when I was able to run again. Some x-rays later and a bit of rehab and my body seems to be working again. Longest I have ever run before (and during training) is 13 miles, how hard can it be to run 3-4 times longer. And yes, I am stupid enough to give it a shot in my five-finger barefoot shoes. At least the weather is looking nice! Hopefully I’ll be able to tell you all about it in a few days.
Me and Anna have spend some of our weekends lately exploring different bike trail around the region. A month back we went biking along the C&O Canal in Western Maryland and with the resent flooding the road was filled with snakes and other wildlife like beavers and a full grown black bear. I was stoked! Must say that Anna impressed me by biking next to a swimming snake (the road was flooded) without to much fuss.
Other things that have happened this spring is a lot of work and some more work (am I turning  American..?) As a counterpart to that the garden is looking great and I have been quite fanatic this year. What better way to calm down after a long day then to water your plants, rainy days or not. I even designed a passive irrigation system and planted a bunch of heirloom tomatoes from seed, I'll get around to show my ingenious design some later time.